Sarkodie to have a collaboration with Cardi B

Tema-based rapper Sarkodie is set to have partnership with American rapper Cardi B in a poll conducted by Billboard.

Not long ago American brand Billboard set up a poll to pick the next act to feature the outspoken rapper, and Ghana’s own Sarkodie was included in the list.

The whole aim of the polls was to get fans to select who should work with Cardi B next.

The list included acts from around the globe including some of the top American acts such as Lil Nas X, Charlie Puth, Roddy Ricch, Sukihana, Mulattp, Normani, Rubi Rose, Rosalia, Rihanna, Jenni Kim, Christina Aguilera, BTS and a host of others.

Sarkodie took more than 70 per cent of the overall vote cast after the elections. 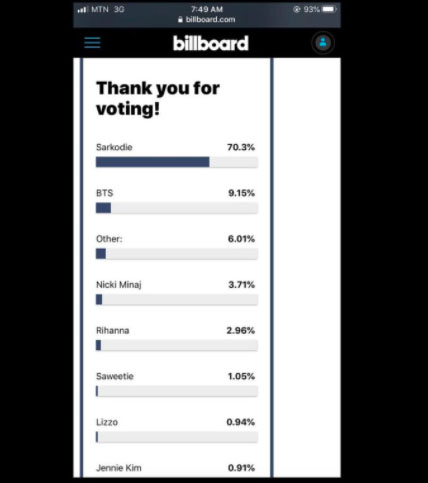 Remix Of Meghan Trainor’s International Hit Song “Made You Look Ft. Kim Petras” Is Released:Check Out

With A New Collaboration With Kwabena Kwabena, Akwaboah Prepares For Valentine Day.

Burna Boy Is The Only Nigerian To Achieve This, Joining Wizkid And Davido.